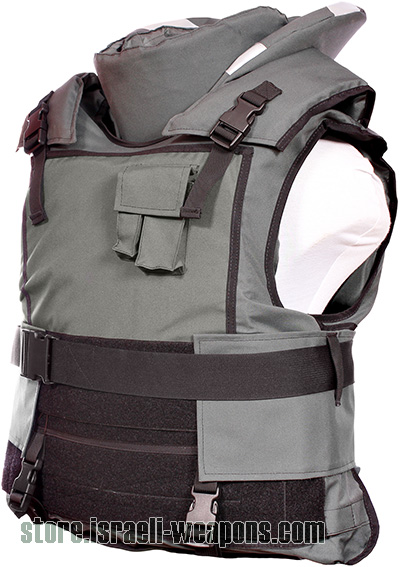 Kevlar was one of the first materials effectively used in bulletproof vest sold commercially on the market. Later, Spectra fibers were developed and served as the main competition for Kevlar vests. Even though more recent materials have been developed, like Zylon, Kevlar and Spectra continue to be the most prevalent materials on the market.

Stephanie Kwolek, working for DuPont corporation, invented Kevlar in 1965. The process that is used to manufacture Kevlar is called polymerization. The Kevlar plastic is extruded through a metal plate with many holes in it and through each hole a single filament of Kevlar is formed. Then, all the filaments are woven into a Kevlar yarn and this yarn is used to make body armor. For even increased protection, many layers of are added on top of each other until the necessary level of protection is achieved.

Spectra fibers are manufactured differently than Kevlar vest in that the fibers are laid down beside one another to form a solid layer and a special resin is used to hold them to each other and in place. Then, another layer of Spectra is laid down perpendicular to the first layer and glued together with resin to hold the two sheets of Spectra together. The resulting product is a nearly impenetrable and very durable cloth that is not woven, but layered into place.

Starting in 1998, Zylon material began to be used in bodyarmor. This highly resistant material is a synthetic polymer that was first used by its Japanese manufacturer, Toyobo, for tennis rackets and other sporting goods. But, in 2005 Toyobo began to get complaints about its Second Chance bodyarmor because it was found that the Zylon material degraded and broke down at a rapid rate. This precipitated in a large class action lawsuit in the United States involving many police departments, officers, and many others who had been injured while wearing these vests. Toyobo lost the case and the settlement involved paying attorney’s fees, creating a police bullet proof vest replacement fund, and providing police departments with discounts for the following five years so that they were able to replace their vests at a reduced price.

Clearly, not all bullet proof vest are the same, the material that have been tested and shown to be reliable will always be the best ones used to make body armor. Newer and lighter versions of Kevlar and Spectra have been manufactured that are stronger and provide better protection for law enforcement officers. For certain, other newer and innovative products will be developed to provide equal and improved protection.